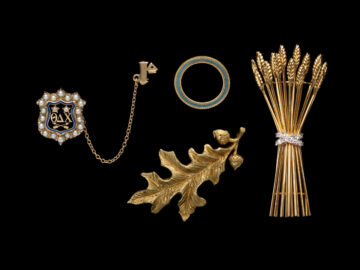 Pins Shown from Left to Right

Long before Albright became a diplomat, she learned to appreciate jewelry as a means of connecting one family generation to another. Among her favorite treasures are a ring worn by her mother and a Bohemian garnet set received as a wedding present from her parents. Her parents also gave her “Tito’s ring,” originally a gift from Yugoslav dictator Marshal Tito. Albright’s father had served as the Ambassador from Czechoslovakia to Yugoslavia shortly after World War II. When first shown the ring, he commented, “I wonder whose finger they cut off to get this.” Albright finally wore the ring when she was among those representing the United States at Tito’s 1980 funeral in Belgrade.

Other pieces associated with her early years include a circle pin that she wore while a student, her future husband’s fraternity pin, a jade dragon from his grandmother, and an alumnae leaf from Wellesley College. The Sheaf of Wheat, a symbol of abundance and health, was given to her upon her return to Georgetown University after serving as Secretary of State. 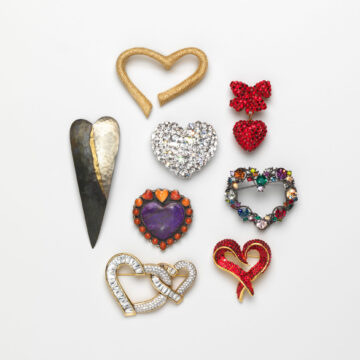