Story of the Exhibit 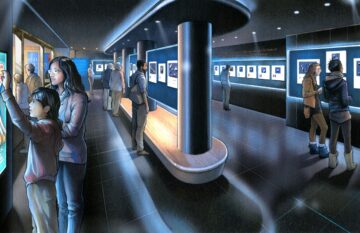 Read My Pins: The Madeleine Albright Collection features more than 200 pins, most of the costume variety, which Secretary Albright wore to communicate a message before, during, and after her years of public service, including the years she led the Department of State, from 1997 to 2001.

Sometimes demure and understated, sometimes outlandish and outspoken, these pins were used as gentle implements of statecraft. Their stories and messages reflect the Secretary’s sense of humor and her humanity and are visual educational tools of cultural diplomacy.

The original traveling exhibition was organized by the Museum of Arts and Design in New York and featured the pins on 50 panels plus 12 free-standing pins, many of which the incomparable Secretary Albright donned to communicate a message or a mood during her diplomatic tenure. Sparkling with Albright’s wit and brio, the collection is notable for its historic significance as well as for demonstrating the expressive power of jewelry and its ability to communicate through a style and language all its own.

From 2009 to 2018, the exhibition was on display at 22 museums and presidential libraries and museums. Elaine Shocas, Albright’s chief of staff at the Department of State, was the inspiration and driving force for the exhibition and accompanying book, Read My Pins: Stories from a Diplomat’s Jewel Box.

Read My Pins is on loan to the National Museum of American Diplomacy, and Secretary Albright will donate the exhibition to the Museum upon the completion of the gallery space. The museum is scheduled to open in 2024. The collection includes the Presidential Medal of Freedom awarded to her by President Barack Obama in 2012 and items from the set of the television show Madam Secretary.